The copyright in tattoo is over when the last becomes the part of likeness?

Solid Oak has brought copyright infringement lawsuit against 2K Games and Take-Two. Take-Two is a major developer, publisher, and marketer of interactive entertainment and video games that develops and publishes products through its wholly-owned subsidiaries, 2K and Rockstar Games. Defendants annually release an updated basketball simulation video game that depicts basketball with realistic renderings of different NBA teams, including lifelike depictions of NBA players and their tattoos.

Plaintiff claimed that Defendants have infringed its copyrights by publicly displaying works for which Plaintiff owns copyrights – five tattoos that are depicted on NBA players Eric Bledsoe, LeBron James, and Kenyon Martin – in versions 2K14, 2K15, and 2K16 of Defendants’ basketball simulation video game. The Tattoos comprise only a miniscule proportion of the video game data: only 0.000286% to 0.000431% of the NBA 2K game data is devoted to the Tattoos.

The Tattoos appear merely as “visual noise,” “no more noticeable than a simulated player’s nose shape or hairstyle.” The Tattoos also cannot be observed clearly because they are often “blocked from view by other players,” are “obstructed by other game elements,” “often appear out-of-focus,” and “players on whom the Tattoos appear move quickly in the game.” The Tattoos did not play a significant role in marketing NBA 2K. The NBA 2K game covers do not depict the Players or their tattoos, and the advertising materials neither depicted nor discussed the Tattoos.

Defendants moved to dismiss Plaintiff’s complaint for copyright infringement, arguing that Plaintiff cannot prove its claim because Defendants’ use of the Tattoos is de minimis and Plaintiff is thus unable to prove the key substantial similarity element of its cause of action. Plaintiff protested that “Defendants have provided no material extrinsic evidence that answers the material questions surrounding de minimis use.”

Defendants further argued that the copyright claim must fail because their use of the images was pursuant to implied authorization granted prior to Plaintiff’s acquisition of any rights in the Tattoos. Plaintiff disputed this proposition, arguing that the tattooist’s expectations about whether a tattoo would become a part of his or her client’s likeness “play no role in copyright law.” Plaintiff also asserted that “any restriction on Plaintiff’s ability to commercially exploit the underlying artwork should have been included in the Tattoo licensing agreements.”

The quantitative component of a de minimis analysis concerns (i) “the amount of the copyrighted work that is copied,” (ii) “the observability of the copied work – the length of time the copied work is observable in the allegedly infringing work,” and (iii) factors such as “focus, lighting, camera angles, and prominence.”

“Observability of the copyrighted work in the allegedly infringing work” is fundamental to a determination of whether the “quantitative threshold” of substantial similarity has been crossed. Substantial similarity must be determined through application of the “ordinary observer test,” which considers “whether an average lay observer would recognize the alleged copy as having been appropriated from the copyrighted work.”

When the Tattoos do appear during gameplay (because one of the Players has been selected), the Tattoos cannot be identified or observed. The undisputed evidence of record shows that Defendants’ use of the Tattoos in NBA 2K falls below the quantitative threshold of substantial similarity. No reasonable fact finder could conclude that Plaintiff has carried its burden of proving that Defendants’ use of the copyrighted material was substantially similar to Plaintiff’s copyrighted work.

“A copyright owner who grants a nonexclusive license to use his copyrighted material waives his right to sue the licensee for copyright infringement.”

The undisputed factual record clearly supports the reasonable inference that the tattooists necessarily granted the Players nonexclusive licenses to use the Tattoos as part of their likenesses, and did so prior to any grant of rights in the Tattoos to Plaintiff.

(i) The Players each requested the creation of the Tattoos,

(ii) The tattooists created the Tattoos and delivered them to the Players by inking the designs onto their skin; and

(iii) the tattooists intended the Players to copy and distribute the Tattoos as elements of their likenesses, each knowing that the Players were likely to appear “in public, on television, in commercials, or in other forms of media.”

Thus, the Players, who were neither requested nor agreed to limit the display or depiction of the images tattooed onto their bodies, had implied licenses to use the Tattoos as elements of their likenesses. Defendants’ right to use the Tattoos in depicting the Players derives from these implied licenses, which predate the licenses that Plaintiff obtained from the tattooists. 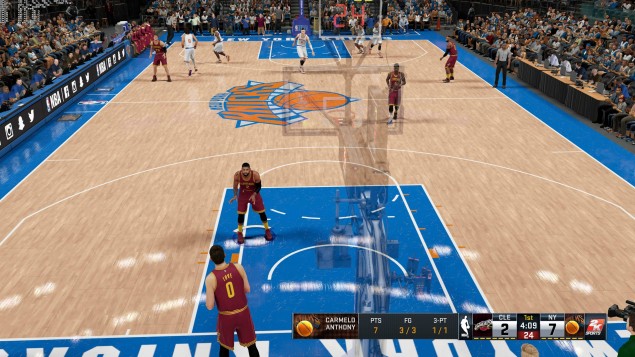 Purpose and Character of the Use

Defendants reproduced the Tattoos in the video game in order to most accurately depict the Players, and the particulars of the Tattoos are not observable. The uncontroverted evidence thus shows that the Tattoos were included in NBA 2K for a purpose – general recognizability of game figures as depictions of the Players – different than that for which they were originally created.

Second, Defendants “significantly reduced the size of the Tattoos” in the video game. This reduction in size, along with the other game elements, makes the Tattoos more difficult to observe. Thus, NBA 2K does not “offer more than a glimpse of the Tattoos’ expressive value,” as the Tattoos are too small and distorted for game users to even recognize them in NBA 2K.

Third, the Tattoos’ expressive value is minimized in NBA 2K. Lastly, NBA 2K’s purpose is commercial and, as a result, the Tattoos’ inclusion in the game is also commercial. However, the Tattoos are indistinguishable during gameplay and they do not feature in any of the game’s marketing materials. Further, the Tattoo images are merely “incidental to the commercial . . . value of the game,” because “consumers do not buy NBA 2K video games for the tattoos on LeBron James, Eric Bledsoe or Kenyon Martin.”

Nature of the Copyrighted Work

The Tattoo designs are more factual than expressive because they are each based on another factual work or comprise representational renderings of common objects and motifs that are frequently found in tattoos. The tattooists each stated that the Tattoos copied common tattoo motifs or were copied from designs and pictures they themselves did not create. There is no evidence from which a reasonable fact finder could conclude that the Tattoos were sufficiently “expressive” or “creative” to make this factor weigh against a finding of fair use.

Amount and Substantiality of the Use

Here, the undisputed evidence shows that, while the Tattoos were copied in their entirety, Defendants did so in order to effectuate the transformative purpose of creating a realistic game experience. Considering this purpose, it would have made little sense for Defendants to copy just half or some smaller portion of the Tattoos, as it would not have served to depict realistically the Players’ likenesses.

Effect on the Market

Use of the Tattoos in NBA 2K could not “deprive the rights holder of significant revenues” because potential purchasers of the Tattoo designs are unlikely to “opt to acquire the copy in preference to the original.” Plaintiff is not licensed to use the Players’ publicity rights.

Because the uncontroverted evidence demonstrates that all four factors weigh in Defendants’ favor, the Court concluded that no reasonable fact finder could determine that Defendants’ use of the Tattoos in NBA 2K was not fair use.