The creation, curation, and provision of timely and accurate music lyrics transcriptions is not protected by the Copyright Act 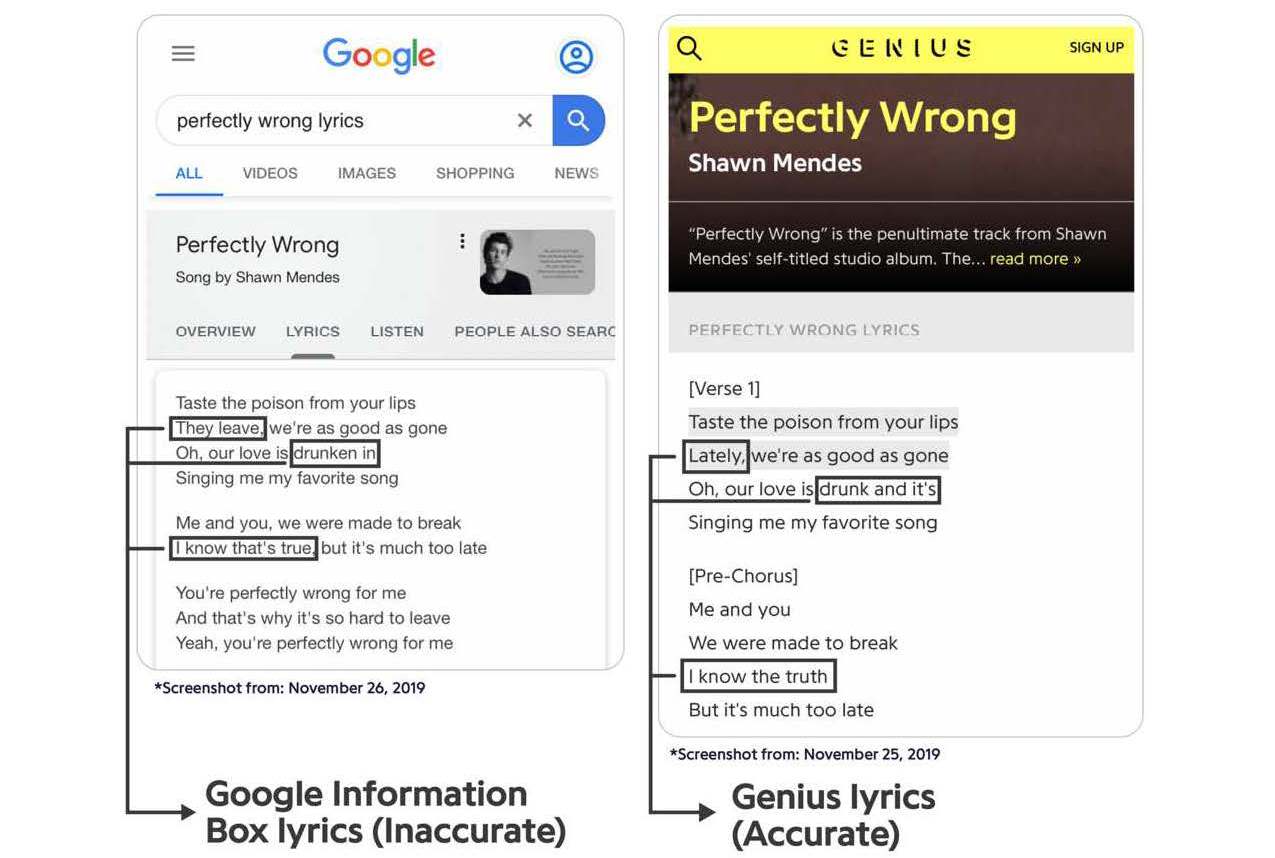 Genius Media Group (Plaintiff) is a “digital media company,” one of whose “primary services is the development and maintenance of annotated music lyrics.” LyricFind is a Canadian company that maintains a database of music lyrics. Both Plaintiff and LyricFind “license lyrics for display and distribution from music publishers.” Google “owns and operates the internet’s dominant search platform.” Pursuant to an agreement “LyricFind provides lyrics to Google for use in Google’s search results.”

While music publishers “usually own the copyright in the lyrics for a given song,” companies like Plaintiff and LyricFind “do not typically receive any actual lyrics transcriptions in connection with their licensing agreements,” and must otherwise generate or obtain the lyrics they have licensed for display. Plaintiff also “obtains lyrics directly” from artists.

Plaintiff “earns revenue in several ways,” including by “licensing its database of high-quality lyrics” to “major companies, such as Apple,” and by “generating ad revenue through web traffic on its website and apps.” All visitors to Plaintiff’s website are bound by terms and conditions, “which are accessible to users from all pages of website.”

Many visitors arrive at Plaintiff’s website via a search engine, “most typically Google’s,” and website “is often the top-ranked organic search result on Google for lyrics search queries.” However, even if Plaintiff is the top-ranked organic result for a user’s lyrics search, a Google search feature known as an “Information Box” may still appear “above all other organic search results,” displaying “the complete lyrics for the requested song.”

Such lyrics Information Boxes are often “displayed in such a manner that the user cannot see any other search results without first scrolling down,” and significantly reduce the “click-through rate” to Plaintiff’s website.

When Google introduced the Information Box feature into its lyrics search results, Plaintiff “observed that the lyrics in those Information Boxes were sometimes identical, on a character-for-character basis,” to lyrics on Plaintiff’s website. Because such a match “is highly unlikely” given the particular nature of the lyrics transcription process, Plaintiff came to suspect that its “lyrics were being misappropriated.”

In August of 2016, in an effort to further investigate this suspected misappropriation, Plaintiff created a “digital watermark to embed in certain lyrics appearing on its site” (“Watermark #1”). In May of 2017, Plaintiff notified Google via email that it had found Watermark #1 in Google’s lyrics Information Boxes, “proving that Google was displaying lyrics copied from Plaintiff’s website.” In response to that initial email and subsequent follow-up communications by Plaintiff, Google informed Plaintiff that it was “looking into the issue.” 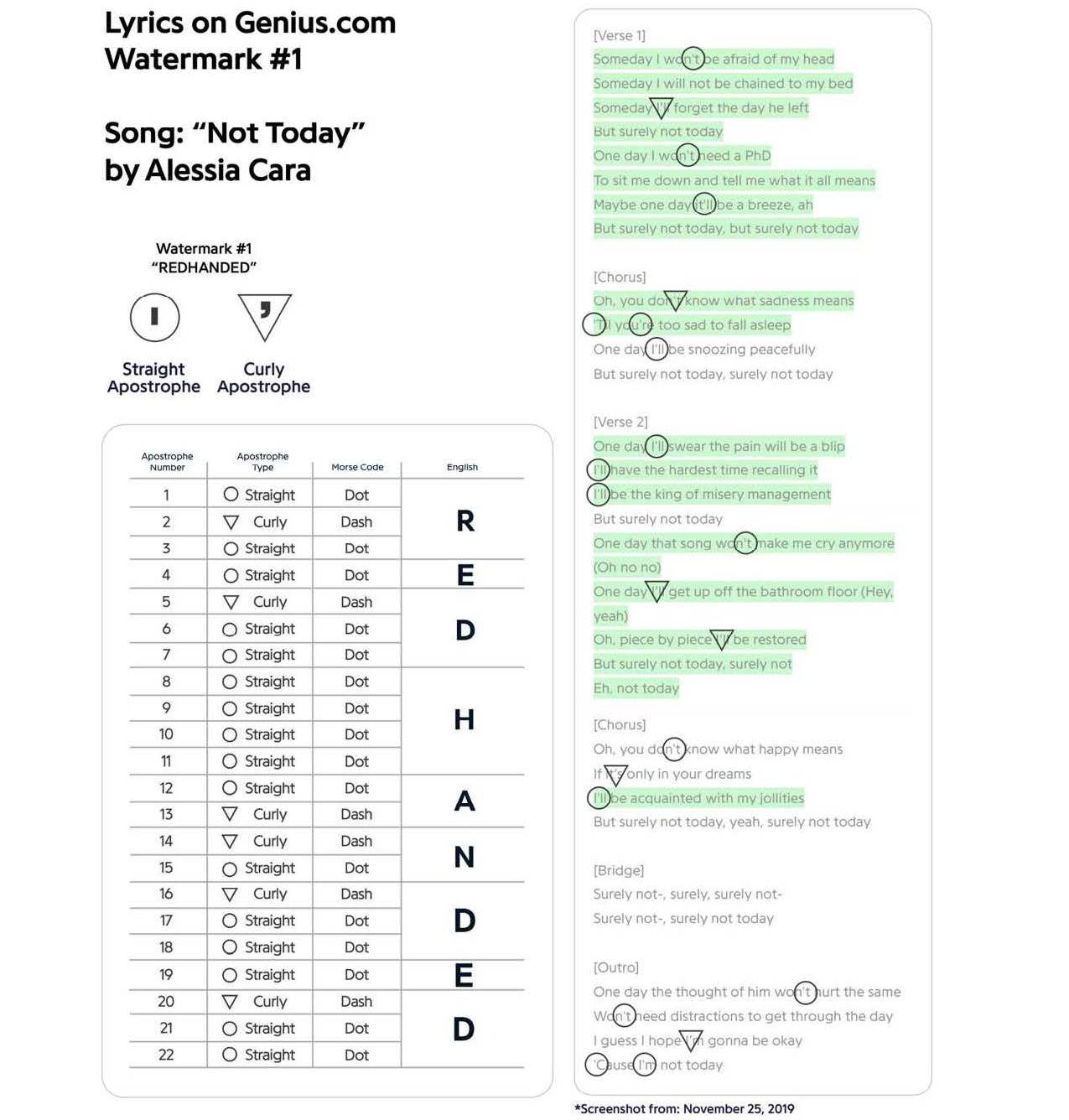 In April of 2019, Plaintiff “again notified Google, in writing, that it was displaying content misappropriated from Plaintiff’s website,” in response to which Google eventually “identified LyricFind as the source of the lyrics in the examples that Plaintiff provided to Google.” Plaintiff then “wrote to LyricFind to request that it cease and desist from the misappropriation and commercialization of content appearing on Plaintiff’s website.” Despite having been “placed on actual notice of their behavior,” Defendants failed to take “any steps to cease such conduct.”

Suspecting “a deliberate effort to conceal continued misappropriation of lyrics from Plaintiff’s website,” Plaintiff created a second watermark, this time designed to spell out the word “GENIUS” in Morse code (“Watermark #2”). In a number of instances involving lyrics in which Plaintiff had embedded both Watermark #1 and Watermark #2, Plaintiff observed that Watermark #2, “the details of which had not previously been made public,” was present, while Watermark #1 was not. 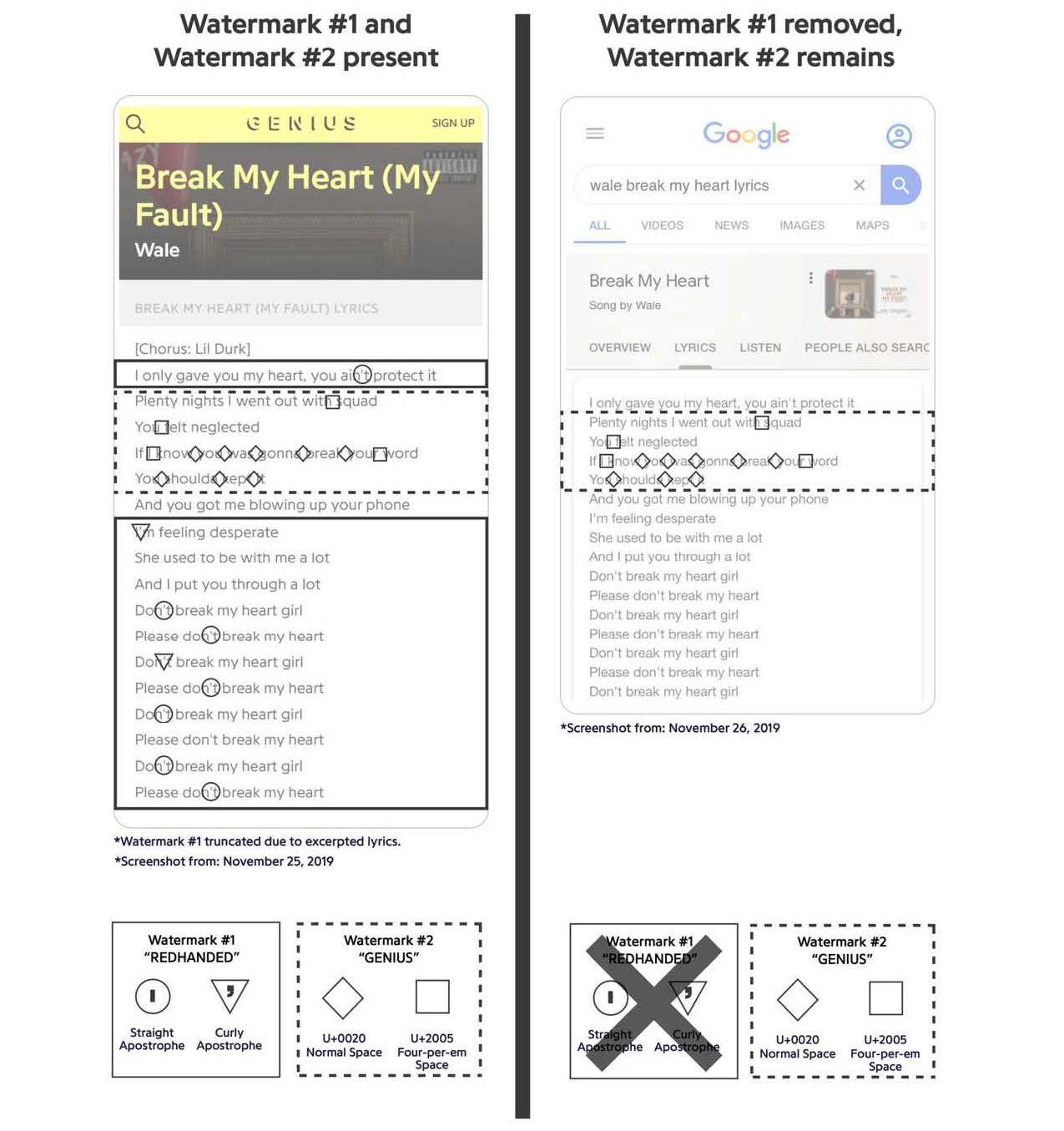 On November 6, 2019, Plaintiff informed Google of these findings, and “demanded that Google stop displaying lyrics misappropriated from Plaintiff’s website and address the issue.” In response, Google asserted it had not done anything wrong, and stated that it had “‘obtained additional assurances’ that their data partners ‘do not, and would not, obtain lyrics from Plaintiff’s website.’”

On December 3, 2019, Plaintiff commenced its action, asserting claims for (1) breach of contract, based on Defendants’ alleged violation of Plaintiff’s Terms of Service; (2) indemnification for “damages and incurred expenses including attorneys’ fees and lost advertising and licensing revenue,” pursuant to Plaintiff’s Terms of Service; (3) unfair competition; and (4) unjust enrichment. Plaintiff sought money damages and injunctive relief.

Plaintiff’s argument is, in essence, that it has created a derivative work of the original lyrics in applying its own labor and resources to transcribe the lyrics, and thus, retains some ownership over and has rights in the transcriptions distinct from the exclusive rights of the copyright owners. 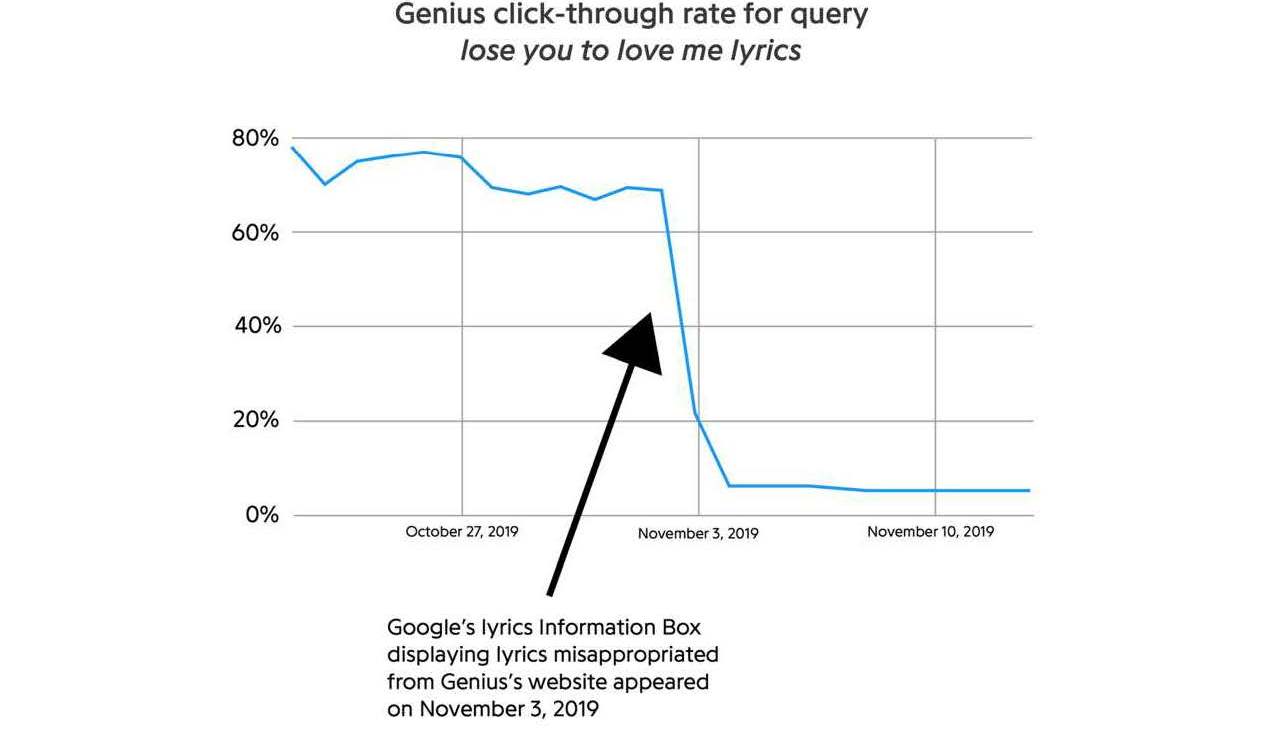 Plaintiff similarly alleges that Google benefitted from its “misappropriation of content from Plaintiff’s website,” by “retaining users in and among Google-owned properties further concentrating its market power,” and that these “benefits came at Plaintiff’s expense.”

Because the “gravamen” of Plaintiff’s unjust enrichment claims is that Defendants were unjustly enriched by their use of Plaintiff’s lyric transcriptions — work that, as discussed above, is within the scope of the Copyright Act — these claims are preempted.

Given that the Court found that all of Plaintiff’s state law claims are preempted by the Copyright Act, and Plaintiff has not asserted any federal law claims, the Court dismissed the Complaint for failure to state a claim.