If copyright “is not capable of ‘existing independently’ as a work of art, it is not protectable under copyright law 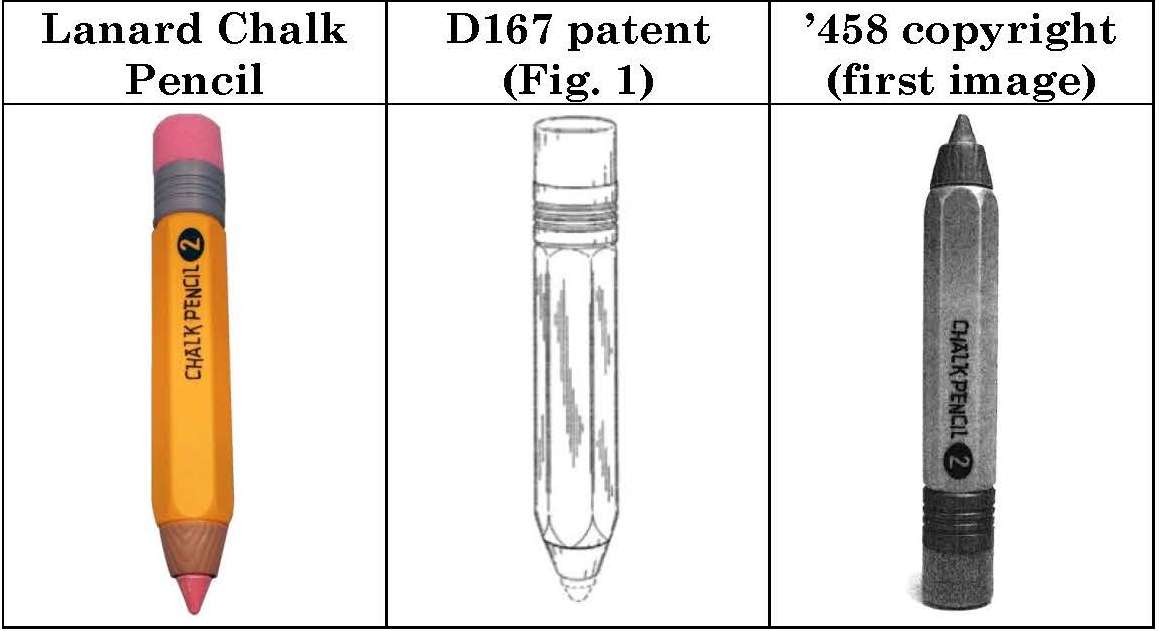 Lanard asserted three challenges against the district court’s decision on design patent infringement. First, Lanard argues that the court erred in its claim construction by eliminating elements of the design based on functionality and lack of novelty.

The district court began by placing the patented design side-by-side with the Ja-Ru product and noting that they “share a broad design concept – they are both chalk holders designed to look like a no. 2 pencil.” But, importantly, the court noted that “the problem for Lanard, however, is that the design similarities stem from aspects of the design that are either functional or well-established in the prior art.”

Thus, the court found that “the attention of the ordinary observer ‘will be drawn to those aspects of the claimed design that differ from the prior art,’” which would cause “the distinctions between the patented and accused designs to be readily apparent”.

The court concluded, based on the evidence presented, that no reasonable fact finder could find that an ordinary observer, taking into account the prior art, would believe the accused design to be the same as the patented design.

To be clear, the “ordinary observer” test for design patent infringement requires the fact finder to “compare similarities in overall designs, not similarities of ornamental features in isolation.” But, while the “ordinary observer” test is not an element-by-element comparison, it also does not ignore the reality that designs can, and often do, have both functional and ornamental aspects.

As the district court found, Lanard’s ’458 copyright for a “Pencil/Chalk Holder” has an intrinsic utilitarian function – storing and holding chalk and facilitating writing or drawing – which makes it a useful article under the Copyright Act.

Thus, as the district court noted, the pertinent question is whether the copyright incorporates features that are sufficiently “separable” from the utilitarian aspects of the article to be eligible for copyright protection.

Based on that finding, the court concluded that the features of Lanard’s copyright “are not capable of ‘existing independently’ as a work of art, and therefore, it is not protectable under copyright law.”

Furthermore, the ’458 copyright shows images that appear to be a pencil with the words “Chalk Pencil” on it, and the copyright is titled “Pencil/Chalk Holder.” Based on that limited information, in conjunction with its arguments in the district court and this appeal, Lanard is essentially seeking to assert protection over any and all expressions of the idea of a pencil-shaped chalk holder.

The appeal affirmed the judgment of the district court.