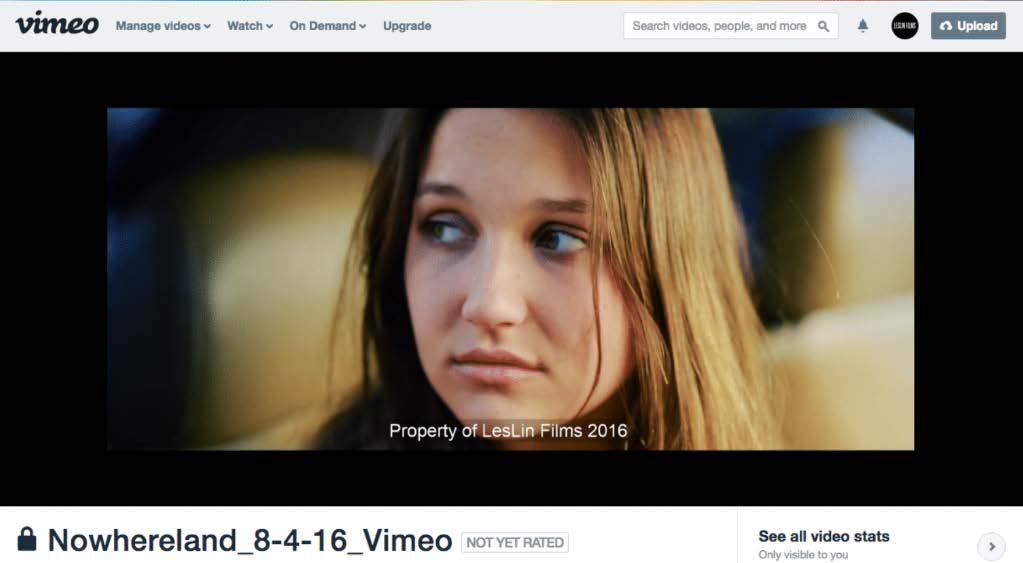 Robin Bain insisted that she registered the copyright for the motion picture Nowhereland, which was also distributed as Girl Lost (the “Film”). Bain wrote, produced, directed, and performed in the Film, which was completed in late 2015 or early 2016. Haid appeared in the Film.

Bain alleged that Haid asked Bain to allow Haid to add scenes from the Film to her acting reel, but Bain refused, fearing that release of portions of the Film could hinder Bain’s efforts to obtain a distribution deal for the film. The Film was exhibited at a number of film festivals in 2016 and distributed on streaming platforms and through other avenues beginning in 2018.

In 2017, after the Film was screened at film festivals, but before a wider commercial release, Haid obtained a watermarked copy of the Film. Haid retained LA Media Works, Corp. (“LA Media”) to edit scenes from the Film to create an acting reel she could submit to casting directors so that Haid could obtain additional acting roles in other productions.

Haid then filed, on August 28, 2018, a Counterclaim against Bain. According to the Counterclaim, among other allegations, Bain exposed Haid to unsafe conditions on the film set and, given the length of time Haid was on set, and the daily flat rate Haid was paid, Bain failed to pay Haid minimum wage for her work on the set, failed to pay her for reshoots or promotional work for the Film, and did not provide wage statements required by California law.

Purpose and Character of the Use

Haid’s reel is transformative. Unlike the Film, which seeks to tell a story involving the sexual exploitation of women, the reel tells no story. The reel’s purpose is to provide information about Haid’s acting abilities so that casting directors may become interested in casting her in other roles. The reel changes the original work by showing mostly brief portions of selected scenes in a manner that conveys little information about the plot of the film. This factor therefore weighs strongly in Haid’s favor.

Nature of the Copyrighted Work

Here, by the time Haid created the reel, the Film had screened at approximately 6 film festivals, but had not been released commercially. As a result of both the Film being close to the “core of intended copyright protection” and the limited nature of the Film’s release prior to the creation of Haid’s reel, the Court concludes that this factor weighs in favor of Bain.

Amount and Substantiality of the Portion Used

Even the longer version of Haid’s reel, at 3 minutes and 39 seconds, comprises less than 4% of the Film’s 95 minute length, with all but 2 of the 40 clips lasting less than 10 seconds. The reel’s use of 1 minute and 9 seconds from the 2 minute and 37 second motel scene, which Bain characterizes as “the most pivotal scene in the Film,” presents a closer question.

However, the Ninth Circuit “has acknowledged that this factor will not weigh against an alleged infringer, even when he copies the whole work, if he takes no more than is necessary for his intended use.” Even here, the length of the scene used in the reel serves the purpose of conveying Haid’s acting range in a way that a shorter clip from that scene might not. This factor therefore weighs in favor of Haid.

Effect of the Use on the Potential Market

Although Bain characterizes Haid’s use as “commercial,” because Haid hoped to obtain payment for additional acting jobs she might obtain as a result of the distribution of the reel to casting directors, there is no evidence that Haid ever required payment for her reel or distributed the copy of the Film saved on her Google Drive to anyone other than LA Media for creation of the reel.

There is no reasonable probability that distribution of an actor’s reel like those prepared for Haid to casting directors – the intended “market” for such a reel – would interfere with the profitability of or market for a film. The Film and the reel serve different market functions. This factor therefore weighs in favor of Haid.

Of the four factors, only the nature of the copyrighted work favors Bain. The remaining factors, based on undisputed facts, weigh decidedly in favor of a finding that Haid’s reel was a transformative use of the Film, for a different purpose, using a limited portion of the original work, and without causing a substantial effect on the market for the Film.

The Court therefore concluded that Haid’s use of the Film for her reel was “fair” for purposes of 17 U.S.C. § 107, and that Haid is entitled to summary judgment on Bain’s copyright infringement claims.