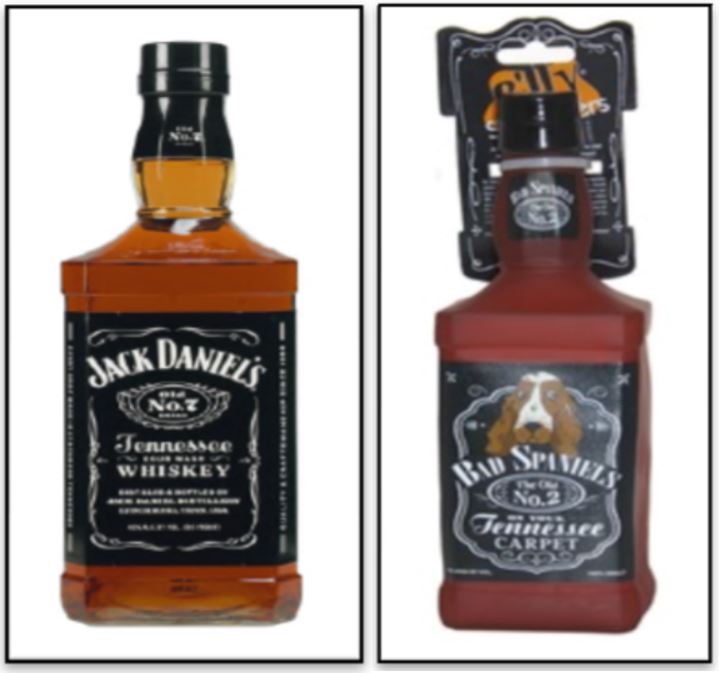 VIP Products sells the “Bad Spaniels Silly Squeaker” dog toy, which resembles a bottle of Jack Daniel’s Old No. 7 Black Label Tennessee Whiskey, but has light-hearted, dog-related alterations. For example, the name “Jack Daniel’s” is replaced with “Bad Spaniels,” “Old No. 7” with “Old No. 2,” and alcohol content descriptions with “43% POO BY VOL.” and “100% SMELLY.”

After Jack Daniel’s Properties, Inc. (“JDPI”) demanded that VIP cease selling the toy, VIP filed this action, seeking a declaration that the toy did not infringe JDPI’s trademark rights or, in the alternative, that Jack Daniel’s trade dress and bottle design were not entitled to trademark protection.

JDPI counterclaimed, asserting trademark infringement and dilution. After ruling on cross-motions for summary judgment and conducting a four-day bench trial, the district court found in favor of JDPI and issued a permanent injunction enjoining VIP from manufacturing and selling the Bad Spaniels toy.

The appeal has affirmed the district court’s summary judgment in favor of JDPI on the issues of aesthetic functionality and distinctiveness. However, because the Bad Spaniels dog toy is an expressive work entitled to First Amendment protection, the appeal has reversed the district court’s judgment on the dilution claim, vacated the judgment on trademark infringement, and remanded for further proceedings.

VIP designs, markets, and sells “Silly Squeakers,” rubber dog toys that resemble the bottles of various wellknown beverages, but with dog-related twists. VIP’s purported goal in creating Silly Squeakers was to “reflect” “on the humanization of the dog in our lives,” and to comment on “corporations that take themselves very seriously.” Over a million Silly Squeakers were sold from 2007 to 2017.

In July of 2013, VIP introduced the Bad Spaniels squeaker toy. The toy is roughly in the shape of a Jack Daniel’s bottle and has an image of a spaniel over the words “Bad Spaniels.”

In 2014, JDPI “demanded that VIP cease all further sales of the Bad Spaniels toy.” VIP responded by filing action, seeking a declaration that the Bad Spaniels toy “does not infringe or dilute any claimed trademark rights” of JDPI and that Jack Daniel’s trade dress and bottle design are not entitled to trademark protection.

The district court also found as a matter of law that Jack Daniel’s trade dress and bottle design were distinctive, nongeneric, and nonfunctional, and therefore entitled to trademark protection. This left for trial only JDPI’s dilution by tarnishment claims and whether JDPI could establish the likelihood of confusion for trademark infringement.

VIP also failed to rebut the presumption of nonfunctionality and distinctiveness of the Jack Daniel’s bottle design, which is covered by Trademark Registration No. 4,106,178. None of the evidence cited by VIP demonstrates that, “taken together,” the elements of the bottle design registration – including “an embossed signature design comprised of the word ‘JACK DANIEL’” – are functional or nondistinctive. The district court therefore correctly rejected VIP’s request for cancellation of the registered mark.

The Bad Spaniels dog toy, although surely not the equivalent of the Mona Lisa, is an expressive work. The toy communicates a “humorous message” using word play to alter the serious phrase that appears on a Jack Daniel’s bottle – “Old No. 7 Brand” – with a silly message – “The Old No. 2.”

The effect is “a simple” message conveyed by “juxtaposing the irreverent representation of the trademark with the idealized image created by the mark’s owner.” Bad Spaniels comments humorously on precisely those elements that Jack Daniels seeks to enforce here. The fact that VIP chose to convey this humorous message through a dog toy is irrelevant.

Because Bad Spaniels is an expressive work, the district court erred in finding trademark infringement without first requiring JDPI to satisfy at least one of the two Rogers prongs. The appeal therefore vacated the district court’s finding of infringement and remanded for a determination by that court in the first instance of whether JDPI can satisfy a prong of the Rogers test.

Although VIP used JDPI’s trade dress and bottle design to sell Bad Spaniels, they were also used to convey a humorous message. That message is protected by the First Amendment. VIP therefore was entitled to judgment in its favor on the federal and state law dilution claims.