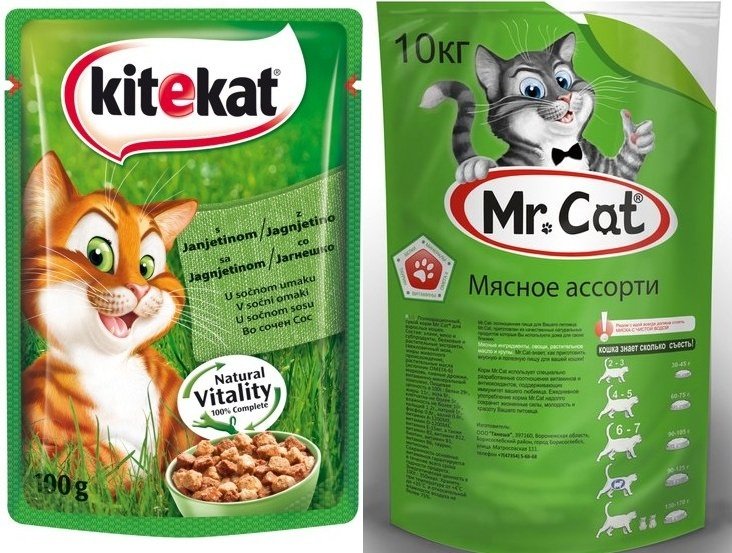 Russian company has received protection for its trademark in 2016 – the trademark has been registered. The mark consists of cat image. The cat holds oval plate, framed with redline, in one paw and the other cat’s paw raised up and giving “thumbs up”. The oval plate contains word element “Mrcat” designed with original typeface and letters of the Latin alphabet. The cat is in bow tie. This trademark is used for individualization of products in form of pet food.

Mars also claimed that the Russian company infringed Mars’s copyright in image of cat. In order to support the claim the company provided an expert opinion. This expert stated that indeed he found similarity in “compositional construction” of both images, in proportional ratio of cats’ ears, noses and eyes size in relation to cat’s heads, in angles of both cats. Mars believes the both (similar) trademarks in Russian market would lead to the confusion of consumers and bear the risk of association between two trademarks. Such opinion is a result of research made by relevant organisation among 1500 respondents.

The Russian company underlined that the Mars did not provide any information on author and right holder of original image served as the basis for trademark at issue. The Mars has rights in trademark, but it does not have any rights in image itself, as the object of intellectual property. Mars’ cat has not been used as trademark in Russia for commercial purposes until the point when the Russian company applied for trademark registration. EU trademark registration is irrelevant for trademark disputes in Russia. Besides, there are no substantial similarities in graphical elements of both trademarks at issue.

After due and careful consideration of the case the Russian federal intellectual property service (Rospatent) has decided as follows:

Therefore the Rospatent did not revoke the Mrcat trademark registration in Russia because the Russian company did not infringe the provisions of Russian civil code on time priority and similarity of trademarks.