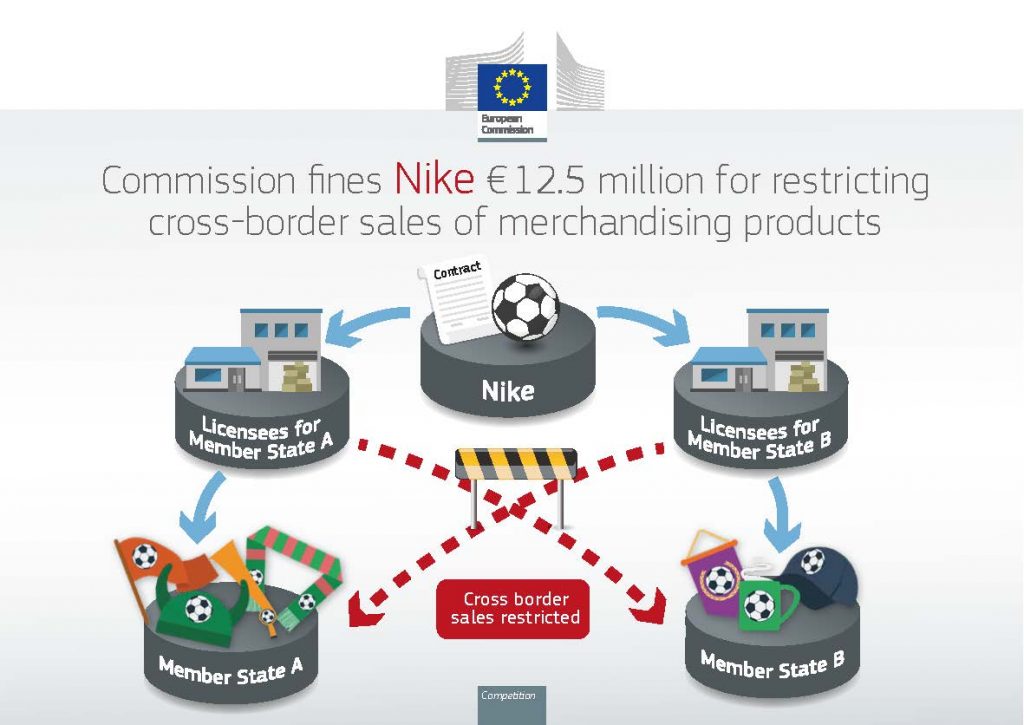 This spring the European Commission has fined Nike €12.5 million for banning traders from selling licensed merchandise to other countries within the EEA. This restriction concerned merchandising products of some of Europe’s best-known football clubs and federations, for which Nike held the licence.

Licensed merchandising products are extremely varied (e.g. mugs, bags, bedsheets, stationery, toys) but all carry one or more logos or images protected by intellectual property rights (IPRs), such as trademarks or copyright. Through a licensing agreement, one party (a licensor) allows another party (a licensee) to use one or more of its IPRs in a certain product. Licensors typically grant non-exclusive licenses to increase the number of merchandising products in the market and their territorial coverage.

Nike’s core business is the design and sale of athletic footwear and apparel, including for football clubs and federations, which generally feature Nike’s registered trademarks, such as its name or “Swoosh” logo. Other products, so-called “licensed merchandise”, only feature the brands of a football club or a federation, not Nike’s trademarks. For these products, Nike acts as a licensor of IPRs that grants licences to third parties, who become entitled to manufacture and distribute those products. It is in the context of Nike’s role as a licensor for the manufacture and distribution of these licensed merchandise products that the Commission is imposing a fine.

In June 2017, the Commission opened an antitrust investigation into certain licensing and distribution practices of Nike to assess whether it illegally restricted traders from selling licensed merchandise cross-border and online within the EU Single Market. The Commission investigation has found that Nike’s non-exclusive licensing and distribution agreements breached EU competition rules:

The Commission has concluded that Nike’s illegal practices, which were in force for approximately 13 years (from 1 July 2004 until 27 October 2017), partitioned the Single Market and prevented licensees in Europe from selling products cross-border, to the ultimate detriment of European consumers. Nike’s illegal practices affected to varying degrees the licensed merchandise products bearing the brands of clubs like FC Barcelona, Manchester United, Juventus, Inter Milan and AS Roma, as well as national federations like the French Football Federation.

The Commission granted Nike a 40% fine reduction in return for its cooperation beyond its obligation. The fine was set on the basis of the Commission’s 2006 Guidelines on fines. Regarding the level of the fine, the Commission took into account, in particular, the value of sales relating to the infringement, the gravity of the infringement and its duration, as well as the fact that Nike cooperated with the Commission during the investigation. The fine imposed by the Commission on Nike amounts to €12 555 000. Any person or company affected by anti-competitive behaviour as described in this case may bring the matter before the courts of the Member States and seek damages.