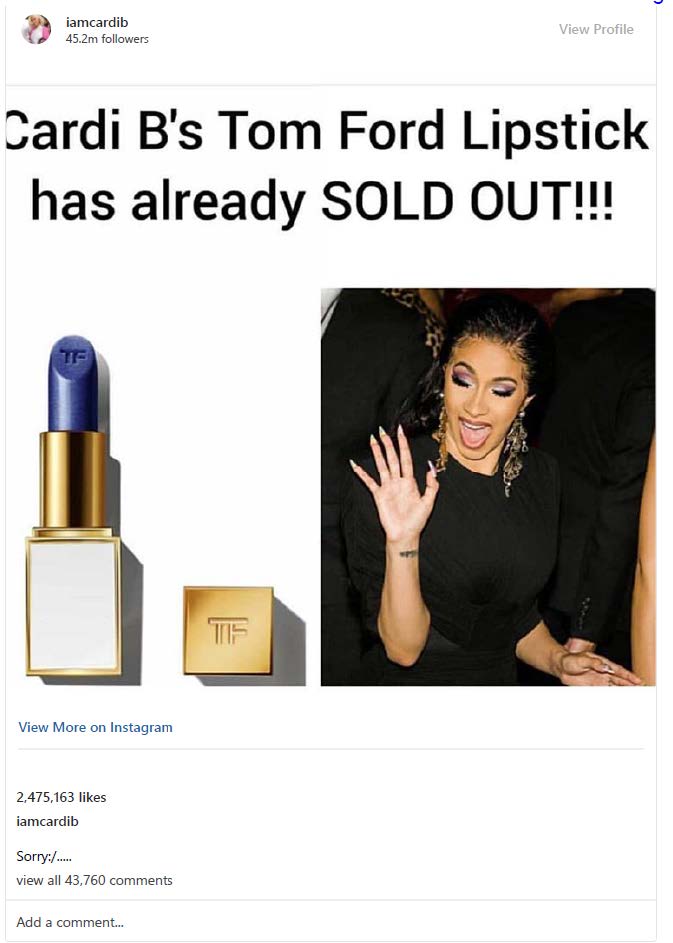 Rebecca Fay Walsh is a Brooklyn-based professional photographer who licenses her photographs to online and print media for a fee. Townsquare Media is a Delaware-incorporated business that owns and operates an online website called XXL Mag (“XXL”).

On September 5, 2018, Rebecca photographed rapper and celebrity Cardi B at a Tom Ford Fashion show in New York City. At around the time of the fashion show, she captured numerous photographs of Cardi B, and then made them available for license through Getty Images, a stock photography agency. Among those photographs is the one at issue. Rebecca has a copyright to the Photograph, which is registered with the US Copyright Office.

On September 10, 2018, Townsquare ran an article on XXL Mag. Beneath the last sentence of the article, XXL Mag embedded the three Instagram posts that were described in the Article. Rebecca did not allege that the Post was embedded, alleging only that Townsquare “expropriated” the Photograph and “displayed” it in the Article. However, Townsquare asserted that the Post was “embedded”, and Rebecca did not dispute this allegation.

The Purpose and Character of the Use

While the Copyright Act suggests that use of a copyrighted work for news reporting purposes is likely to constitute fair use, “a news reporting purpose by no means guarantees a finding of fair use.” “After all, “the promise of copyright would be an empty one if it could be avoided merely by dubbing the infringement a fair use ‘news report.’” Thus, courts have held that it is not fair to “use an image solely to present the content of that image, in a commercial capacity,” or to otherwise use it “for the precise reason it was created.”

For example, it is not fair use to republish a photograph of a celebrity or public figure intended to generically accompany an article about that person or to describe the event depicted in the photograph. Such uses “merely supersede the objects of the original creation.” However, use of a copyrighted photograph may be appropriate where “the copyrighted work is itself the subject of the story, transforming the function of the work in the new context.”

“For instance, a news report about a video that has gone viral on the Internet might fairly display a screenshot or clip from that video to illustrate what all the fuss is about. Similarly, a depiction of a controversial photograph might fairly accompany a work of commentary or criticism about the artistic merit or appropriateness of the photograph. Courts have also found fair use in cases in which a website published a screenshot of an article from another publication that contained a copyrighted photograph, alongside criticism of the article.

Applying these principles and drawing all inferences in Plaintiff’s favor, this factor favors Defendant because the Article uses the Photograph for an entirely different purpose than originally intended. The Photograph was taken to “depict Cardi B at Tom Ford’s fashion show.” However, as is apparent on the face of the Article, Defendant did not publish the Photograph simply to present its content.

It did not use the Photograph as a generic image of Cardi B to accompany an article about Cardi B, or as an image of her at Tom Ford’s fashion show alongside an article about the fashion show. Rather, Defendant published the Post, which incidentally contained the Photograph, because the Post – or, put differently, the fact that Cardi B had disseminated the Post – was the very thing the Article was reporting on.

In other words, Defendant published the Post in order to provide readers with the original social media interactions reported on by the Article, and included the Photograph as a necessary part of the Post. Indeed, no other image – not even “the Photograph itself as a standalone image” – would have fulfilled the same purpose as the Post itself.

Merely displaying the Post without the Photograph would have been nonsensical in appearance as well as potentially impossible, given that the Post is embedded and hyperlinked, rather than inserted as an image. The Photograph’s function was wholly “transformed … in its new context” and as a result the Article’s publication of the Post in no way “merely supersedes” the original work.

Finally, Plaintiff argued that Defendant is “a for-profit publisher” that “disseminates commercial news content on its website” including advertisements, “evincing Defendant’s intent to exploit Plaintiff’s work.” However, the Second Circuit has recognized that “almost all newspapers, books and magazines are published by commercial enterprises that seek a profit.”

The Supreme Court has acknowledged that tension and “stated that ‘the crux of the profit/nonprofit distinction is not whether the sole motive of the use is monetary gain but whether the user stands to profit from exploitation of copyrighted material without paying the customary price.’”

“That a defendant’s use of copyrighted material is for profit bears less weight when that use is highly transformative; but where a defendant’s use merely ‘supersedes the objects’ of the original, the commercial nature becomes more relevant.” Here, regardless of whether Defendant profits from page views of the Article, its use of the Photograph is transformative, outweighing the commercial nature of the use.

The Nature of the Work

Here, the Photograph contains “both informational and creative elements”: it was taken to “document its subject,” a celebrity, but also displays some “technical skill and aesthetic judgment.” “Although photography, including photography of a celebrity walking around in public, certainly involves skill and is not devoid of expressive merit, the paparazzi images are further from the core of copyright protections than creative or fictional works would be.”

This “renders the degree of creativity a relatively neutral consideration.” However, the Photograph was previously published by Cardi B on her Instagram; thus, pairing the neutrality of the images “with the fact of previous publication, the nature of the images tips slightly in Defendant’s favor.” Therefore, the second factor weighs in favor of fair use.

The Portion of the Work Used

As a quantitative matter, the Post included an uncropped, though resized, version of the Photograph. As a qualitative matter, however, although Plaintiff complains that Defendant could have used any other image of Cardi B to accompany its article or requested a license from Plaintiff, the Post is the only image that could have accomplished XXL Mag’s journalistic objective of describing a social media story and providing readers with the relevant posts. Even the Photograph itself, on its own, would not have been a reasonable substitute.

Further, within its objective, Defendant used only as much of the Photograph as was already included in Cardi B’s Post; in other words, “no more was taken than necessary.” “If copying the original ‘any less would make the picture useless to the story,’ the substantiality of the copying is “of little consequence.” Therefore, the third factor weighs in favor of fair use.

The Potential Market for or Value of the Work

Here, because the Photograph did not appear on its own, but as part of the Post, alongside text and another image, it is implausible that Defendant’s use would compete with Plaintiff’s business or affect the market or value of her work.

“There is little risk that someone looking to license or purchase an image of a Cardi B would select the Post instead of the Photograph, thereby potentially diverting revenue to Defendant that would have otherwise gone to Plaintiff.” Thus, the fourth factor also weighs in favor of fair use.

“Defendant’s use was transformative, its use was reasonable in light of that end, the work was already published, and there is no plausible risk to any market for licensing of the original work.” This is sufficient to establish an affirmative defense of fair use. For the foregoing reasons, Defendant’s motion was granted and the action was dismissed with prejudice.