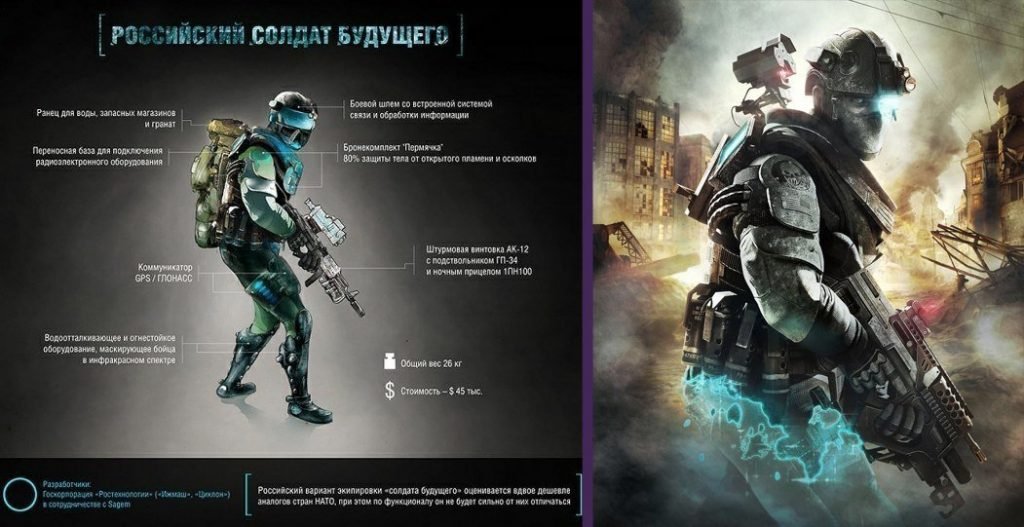 Russian state corporation RosTech has presented the concept of a Russian soldier of future. Some internet users have found many similarities with character from the game Tom Clancy’s Ghost Recon: Future Soldier.

RosTech has commented these similarities – it is “striving to ideal”. “Today computer game developers, as well as developers of combat equipment in whole world, are concerned of the image of the soldier of future. A modern futuristic images share many details in common. More simply: the images of soldier of future, which we can see in fantastic, it is that “ideal”, which want achieve absolutely all, and which, in perspective, will be realized not in 3D graphic, but in reality,” – corporation stated.

Even if images of soldier are similar to game character, it is obvious that it is only a concept. So, it can be changed. “It is not the matter of plagiarism”, – stated RosTech. “Combat equipment, developed by different people in the world, must resolve the same tasks – good protection and to multiple opportunities of a soldier on a battlefield.” “Therefore, a unalterable set of equipment elements has been formed and it circulates in military designing, computer games and fantastic movies.”

Besides, the images, published by vice-premier Rogosin, are old, but they are correct. The real set of equipment is secret and will be not demonstrated – the corporation does not have a rights to publicly show it.

Published in Uncategorised and Works similarity