Russian internet company Mail.ru – the owner of popular Russian social networks VKontakte and Odnoklassniki – asked the Russian Supreme Court to provide legal definition for such terms like “post”, “re-post”, “sharing”, “share”, “like” etc. The company believes legal definitions could ensure objective consideration and assessment of criminal cases in courts in relation to persons accused of terrorism or extremism activity in internet.

The company also asked the Supreme Court to instruct lower courts to take into account all circumstances of such cases and, as stated in Mail’s call, to “establish in all details the motive of imputed deed, because under the Russian law the motive exposes the real nature of socially dangerous deed. Without motive there is no corpus delicti, there is no crime and no liability.” Mail.ru explained its position – even when the committed deeds are qualified socially dangerous, the Supreme Court could recommend the lower courts to impose a fine in lieu of criminal liability.

Mail.ru also has asked the Russian ministry of justice to develop and draft methodology in order to set up a uniform guidance for experts, who makes professional assessment of materials on the subject of extremism and terrorist activity in online environment. On the base of such assessments the courts make their decisions and investigators indict the internet users. In practice experts in different administrative district make different assessments of the same materials under the same circumstances.

In most cases there is no clear logic in their expertises except the intention to rise up statistics of solved crimes of terroristic and extremism nature. The more such crimes will be solved, the better the court, investigators and experts work. The good work means bonuses and promotion. There cannot be situation, when no crimes have been committed. That’s the rule of the “stick system”. The more “sticks” you did do, the better for you and your carrier. Besides the state attorneys, who protects the accused persons at the account of the state if such person does not have money to hire attorney, are also in share with enforcement system, they don’t protect their principals.

Mail.ru also has asked the Russian State Duma to adopt the law on amnesty of persons convicted under article 148 (agitation for hate or enmity as well as the humiliation of human dignity) and article 282 (violation of right on freedom of conscience and religion) of Russian criminal code for posts in social networks. According to Mail.ru “the amnesty is to be applied to persons convicted for extremism and dissemination of information and other activity in social networks (including likes, reposts, publication of images) when such activity or dissemination have not entailed socially dangerous consequences”. Russian state Duma promised to make conclusions.

The practice, when Russian internet companies cooperate with enforcement authorities, exists long enough. Why now Mail.ru decided to side with internet users. Because they are traffic and money. Some professionals from IT industry do not believe to kind intention of Mail.ru. Some of them have alleged that the company loses its subscribers. Indeed, some of them advice to others to leave Russian social network. 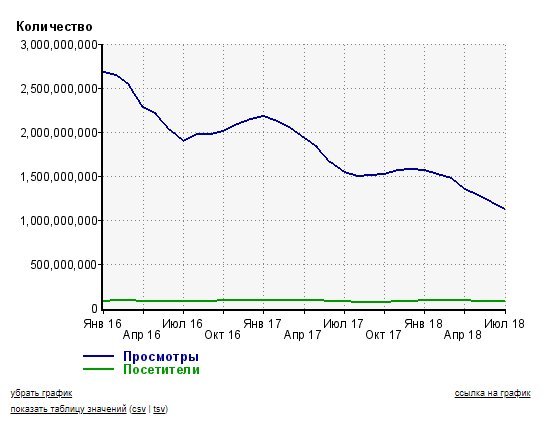 Some internet users have provided statistics of subscribers base in Vkontakte. The statistic is not positive. After publications in foreign social networks, like Twitter, that people migrate from Vkontakte to other services and images of statistics, Vkontakte has closed access to its statistics, which was opened to everyone before.